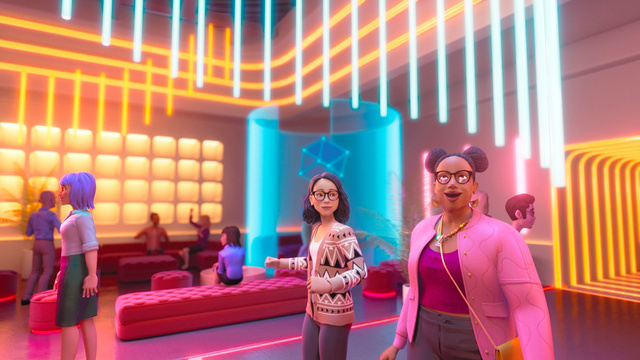 Facebook, the largest social media company, changed its name to “Meta” and clarified its stance of focusing on the virtual space called “Metaverse”. What is happening now in the virtual space, also known as the next-generation Internet? Headed to the “field”.

One weekend, I tried the Meta VR (virtual reality) terminal “Oculus Quest 2” that I bought on my own. The price is 299 dollars (about 34,000 yen). Goggles have their own “eyes,” “ears,” and “mouth,” and the controller that they hold with both hands become their “hands.” First, we headed to “Campfire” in the VR exchange space provided by Microsoft (MS).

Once inside, the participants’ avatars (alternates) were discussed here and there is a place like a campsite in the mountains. I took the plunge and called out to a group of about 5 or 6 people.

“You came from Japan.” A male voice came back in slightly mellow English. The account name of the avatar is “Said”. He is now in Oman, the Middle East. “Come to this room on the weekend and spend an hour or two.” Others were participants from Saudi Arabia, Mexico, and Ireland.

He was connecting from a room in his San Francisco apartment and thought the people here were also in the United States. However, in the virtual space, there is no meaning of a real place. First of all, I realized it.

The male avatar in Sudan has dark brown skin, a fashionable hat, and a beard. I’ve been doing VR for about 5 months and say, “It’s great to be able to make everything in 3D.”

I was invited to a mosque he created in a virtual space. When he clicked on the invitation he received, he teleported to the rooftop of a skyscraper reminiscent of Dubai. A large mosque rises, and people are talking in the square in front of it. The sea of ​​clouds spreads far below, and the sunset is beautiful.

“VR social is interesting because you can meet people from different parts of the world like you do now.” The man was satisfied. As the opponent’s avatar approaches, the voice also approaches. He could hear breathing and sneezing, and he felt like he was nearby.

He noticed that he had forgotten the time and he was laughing out loud, but when he suddenly took off his goggles, he was pulled back to the reality of being alone in his room in the apartment. It was an immersive feeling that I had never experienced before.

The smell of smoke in VR

There is a VR where you can experience the scent. It is a sense of smell VR of the startup company “OVR Technology” in Vermont, USA. He sent me a demo kit right away. Underneath the VR goggles, attach another device with a cartridge that emits particles of various scents. When he entered the virtual space, he was in front of a big waterfall in the woods. The scent of trees is coming.

I was healed while staying in my room. In the campsite scene, the smell of smoke approaches the bonfire. When I lifted the marshmallow stuck in a wooden stick nearby and struck it with fire and brought it close to my nose, I smelled a sweet marshmallow.

“The sense of smell is connected to the part that controls the memory and emotions of the brain. The smell has a strong influence on how we feel and behave every day.” Fragrance expert Aaron Wisniewski, CEO, said: “People who are stressed by Covid can escape from reality and can also acquire skills through training.”

The company provides healing products for drug addicts and PTSD (post-traumatic stress disorder) treatment facilities. On the other hand, for the military, fire department, and police, it is said that it has products that smell smoke, gasoline, and blood for training assuming harsh sites.

US startup company “Z Space” provides educational systems using VR and augmented reality (AR) for schools. I tried it at the headquarters in San Jose. When I put on AR-compatible glasses and lifted an object on the screen of a special computer with a pen-shaped terminal, insects, the heart, and the arms of the robot appeared to pop out of the screen. When you lift it with a terminal and rotate it, it looks three-dimensional and you can even see the inside. It is said to be used in about 25,000 schools nationwide for “STEM education” to study science, technology, mathematics, etc. across the board.

“Children can collaborate together even if they are far away.” Paul Kellenberger, CEO, says so. He said the introduction had accelerated in Corona and was happy to say that “there is a way to go public on the stock market.”

U.S. IT giants move one after another

“Metaverse” is used as a term to refer to all virtual spaces on the Internet. In addition to conventional smartphones and personal computers, we use VR to experience virtual space like reality by attaching goggle-type terminals, and AR (augmented reality) that overlays virtual images on top of real images. ..

Behind the excitement here are technical improvements such as high-speed communication networks such as 5G, machine learning of artificial intelligence (AI), and semiconductors and VR terminals. Furthermore, digitization such as remote work in Corona is accelerating the movement.

Among them, the symbolic movement is that Facebook changed the company name to “Meta” in October and clarified the policy to focus on the Metaverse field.

“Billions of people will be shopping digitally for hundreds of billions of dollars (tens of trillions of yen).” Mark Zuckerberg, CEO, said so when he announced the company name change. The company has invested 10 billion dollars (about 1.1 trillion yen) this year and plans to increase it in the future.

Other major IT companies also work. Starting next year, Microsoft (MS) will introduce the Metaverse function on a trial basis in the conference system “Teams” used by more than 200 million people worldwide. You can meet with people in remote areas through your alter ego avatar. This year, MS has started a demonstration experiment of remote diagnosis for patients with rheumatoid arthritis in cooperation with Nagasaki University and others. To diagnose rheumatism, it is necessary to look at the affected area not only in 2D images but also in 3D. The affected area is photographed with a 3D camera in a medical facility on a remote island, and a 3D video is remotely diagnosed by a doctor at Nagasaki University.

The Wall Street Journal (WSJ) reported this month that Apple is also developing smart glasses for AR and may announce it next year. “The Metaverse is the future of the Internet, where physical and digital spaces merge. Just as the Internet has affected all industries, it affects a wide range of companies,” said Cathy Hackl, a US consultant.

This year, Nike opened “Nike Land” for the US online game giant Roblox, where you can try clothes and sneakers with your avatar. Gucci also set up a similar corner on Roblox. The WSJ reported in November that Nike had applied for a trademark to sell digital versions of sneakers and clothing in virtual space.

Hackl says it’s important to understand two things: ownership of digital assets and how they interact with the consumer community. “Companies such as Nike, Ralph Lauren, and Gucci are at the forefront of understanding these two things. This trend continues among Gen Z and beyond (around 20 years old).”

Japanese start-up companies are also aiming for opportunities in the Metaverse. Third Bath, which is independent from the Japanese game development company “gumi”, will proceed with development based in Silicon Valley and develop VR games worldwide. Koichi Fujikawa, Chief Technology Officer (CTO), mentioned that the number of people who earn crypto assets (virtual currency) by playing in the game is increasing, “If you keep going like this, you will earn and live in the digital space. There can be quite a few people out there. “

What are your safety concerns?

The source of the movement of the Metaverse world is a huge amount of data that far exceeds the current Internet space. Experts have pointed out a wide range of issues, including privacy and security issues, as well as economic disparities, political divisions, and human psychological implications.

According to a 2018 survey by Stanford University in the United States, about 2 million data such as eye movements, hand positions and walking methods will be left after spending 20 minutes in VR space. With just the eyes, detailed biometric data such as the position of the line of sight at each moment, the number of blinks, and the degree of pupil opening can be used to understand the person’s psychological state and degree of fatigue, as well as to determine the person.

“Data is extremely important for AI, such as in cancer diagnosis, and needs to be shared. However, if it falls into the hands of malicious people, human rights may be compromised, and new privacy and safety laws will be applied. Will be needed. ” Kavya Pearlman, a security expert and founder of XRSI, an NGO that calls for security measures in virtual spaces, said so.

This group has created guidelines for dealing with privacy and security in virtual space. We are requesting that users be notified of how to utilize the collected data and that employees be educated.

Through enlightenment activities for companies and governments, we aim to make use of it in the creation of regulations. He has already advised government authorities such as the United Kingdom and Australia and is considering guidelines such as how to handle data in the medical field in virtual space.

“There is no law in the world that can handle the Metaverse, but there is the European General Data Protection Regulation (GDPR) (which has provisions for handling personal data), etc. It is possible to reinforce the existing framework. “.