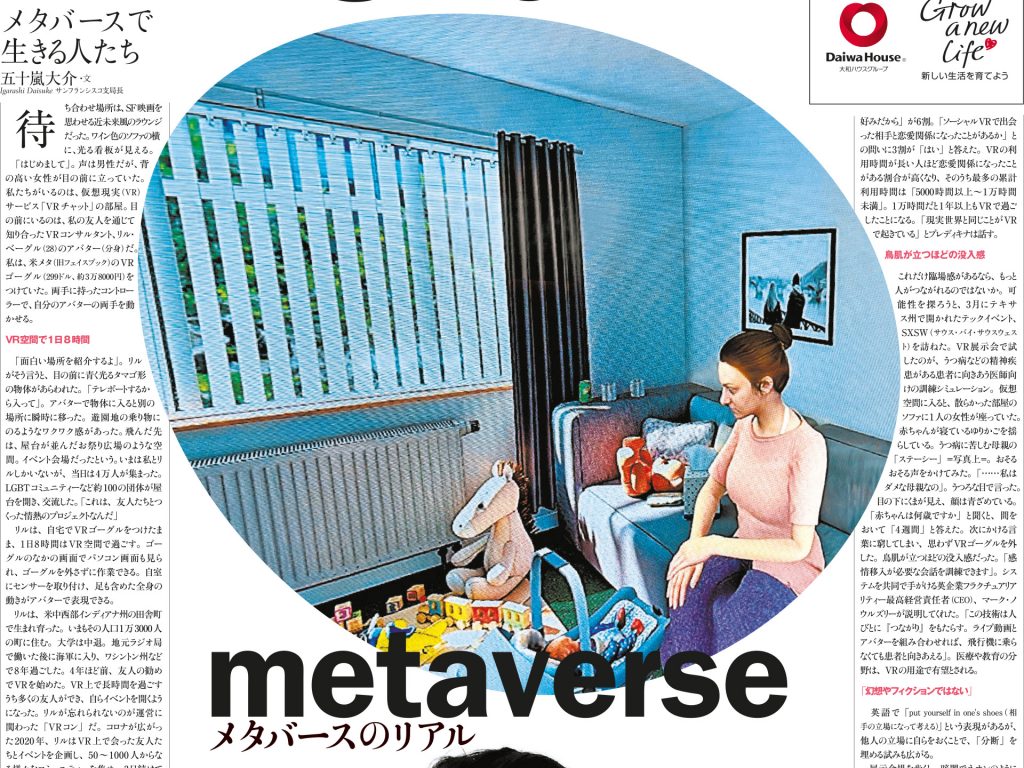 What are the Risks in the Metaverse? 2 Million Data Points were Collected in 20 Minutes

A few years ago, Kavya Pearlman, who lives in the United States, spent about eight hours a day in VR space. She was the head of security at Linden Lab’s virtual space “Second Life,” which was popular in the mid-2000s.

When she was talking to a man she met in virtual space, he suddenly made the gesture of kissing her “avatar.”

Later, she told him never to do such a thing in the virtual space. “The same thing that happens in the real world should happen in virtual space,” she said. According to Pearlman, harassment, violence, and bullying also occur in virtual spaces.

“Someone may hit your avatar and feel nothing, but the more you spend in virtual space, the more you feel pain.”

What does it mean to feel pain in virtual space?

The brain is stimulated from the visual sense of the avatar’s movement. It feels like it is actually touching the body. Wearing a sensory garment called a haptic suit makes it even more realistic.

“The soldiers who lose their hand and they have artificial limbs. Why does it work? Because the brain still thinks there is a hand, and the brain is what is processing the signal. If the brain says somebody is touching you, it still processes it as touch. It actually allows for very intimate sexual expressions in virtual reality without ever having to touch,” she says.

Pearlman, a security expert, created the XR Safety Initiative (XRSI), a nonprofit, and formulated guidelines for privacy and security in virtual space in 2020.

“Parents don’t understand how online abuse or the sharing of intimate images will really affect a young person,” Julie Inman Grant, the Australian Government’s eSafety Commissioner, who XRSI advised, told a local newspaper. “We might think, well, toughen up, sweetheart, this is just happening online, but online is a child’s entire world.”

Ryan Scoble, 12, who lives in Silicon Valley, started playing games on VR devices when he was about nine years old. He enjoyed getting to know British and Australian children while in the room, spending eight hours a day in VR space for a long time. He has quit VR now, but when he was absorbed in it, he recalled, “you lose your track of time.”

Ryan’s father and prominent blogger Robert Scoble said, “This is a problem for parents because most think of it as just a game machine. It’s a very powerful communication machine. You can go from playing feed saber to sexual imagery.”

The source of the power that drives the Metaverse is a huge amount of data that far exceeds the conventional Internet space.

Not only privacy issues but also human psychological effects are pointed out. According to a 2018 survey by Stanford University, 2 million pieces of data on physical movements such as eye movements, hand positions, and walking can be collected in just 20 minutes in VR space.

Even with data on your eyes, you can see your psychological state and tiredness from data such as the position of your eyes, the color of the iris, the number of blinks, and the degree of pupil opening, and you can also identify the person.

Over the past seven years, Kent Bye, who has interviewed more than 1,600 VR people and runs the VR-related podcast “Voices of VR,” said so.

It is likely to affect the “thinking” behavior important to humans.

In the field of brain science, technological development is progressing in which brain signals are directly read, converted into data, and exchanged with a computer. Putting a signal-reading device directly into a person’s head can reflect what a patient with amyotrophic lateral sclerosis (ALS) thinks on a computer.

Tech companies are competing with this technology development. In 2019, Meta (formerly Facebook) acquired a company that handles technology for reading brain signals. The amount was reported to be up to 1 billion dollars (about 128 billion yen).

“The attempt is to use signals from the nervous system that moves the muscles of the hands and fingers outside the brain to move the machine,” said the person in charge.

Founded by renowned entrepreneur Elon Musk, Neuralink is developing chips that can be embedded directly into the human brain. Last year, by embedding a chip using the wireless technology Bluetooth in the monkey’s brain, a demo was released in which the monkey manipulates a computer game just by “thinking.”

Rafael Yuste, a neuroscientist and professor at Columbia University, said, “The problem is if you can combine it with VR, your brain activity could actually leave your head and go somewhere else.” Through VR, brain data may fall into the hands of a malicious third party, and personal actions and memories in virtual space may be manipulated. He said, “this is coming our way no matter what. That’s why we think we have to be prepared.”

In 2017, Yuste and his colleagues, who feared a crisis, introduced a new concept of “Neuro-Rights.” It consists of five rights, including mental privacy, in which individual thoughts are not disclosed without permission.

He explained to senior government officials when he was invited to the White House. Yuste said they were also interested in the national security perspective. VR technology can also be used for information manipulation and torture.

“The technology is getting to the point where it’s affecting the essence of who we are. It’s affecting our lives. We think it is the right time to start thinking using the instrument of human rights,” Yuste emphasizes.